I finally decide that I need a new mobile phone, I had already decided that I did not want an iPhone, but a Android based phone. So I go through the classic buying phases, research(involves lots of Google and asking friends), home in on a brand or few handsets (happened to be HTC), research some more, then flop the wallet out and buy.

Now literally 10 minutes before I stopped haunting the four or so major phone sites, I got an email from Which? saying that HTC had just released two new HTC Desire phones, the HTC Desire HD and the HTC Desire Z. Now the Z has a flip out keyboard like that old Nokia lump, nice, but I was dazzled by the 8Mp camera, 4.3 Screen and HD recording. I have two young children and my previous phone coupled as the family camera and thus these attributes stamped SOLD on my head immediately.

Here is the promo video for the phone, I personally love this style of storyboarding:

Soo now I have the big phat SOLD sign dangling from my head, its down to network, price and data usage. After scouring the net I finally settle on a 24 month contract from T-Mobile called ‘T-Mobile £30 Mobile Internet’ which had a decent amount of minutes (900), some texts (500) and for me crucially 1Gb of net transfer.

While I don’t actually anticipate that I would clear an entire Gig in a month, I would not put it past me and yes I know most places I got have wifi, but still I wanted 1Gb of transfer.

Anyway, I settle on a company called mobilephonesdirect.co.uk, I do my usual checks (ok I suffer from web paranoia), whois check on the domain, phone a store, use their live chat (which is now gone, you’ll find out why soon) and verify their other two stores on Google maps. OK I am comfortable.

Now a secondary clincher was this, noting that its still on thier website almost two months later:

We are an HTC ultimate partner and are receiving stock weekly during November and will supply Desire HD on a first ordered first delivered basis. Order Now and receive a Free 8GB memory card.

Bingo, this phone was not to be released for another week or so, they’re a premium partner, I’ll be one of the first. O-Happy-Days, or soo I thought.

Then Things Started to Go Wrong

I contacted them using their live chat, which was offline, but left a message and shortly afterwards I receive a reply that the phones have not been delivered yet, but would be notified when they had more information.

Now knowing this is a new phone and they’re reliant upon the manufacturer (HTC) to deliver, I wasn’t really concerned, hey they are[?], as they still quote:

So I phone. After five minutes of waiting, ‘Sarah’ answers the phone and to be honest I felt sorry for the girl, I am not the best customer as I ask bloody awkward questions and can be very blunt when rattled by poor customer service. The up shot from the call that the Manager (who would not talk to me) would be emailing ‘The Customers’ the next day.

From her tone, you could tell that she had obviously been beaten up several other times that morning and feeling sorry for her for verbal onslaught I had just given her (that sounds bad, I am always polite honest!), so left it to wait and see what happens in the email.

Ok, now I’m getting narked, after no reply for two days since I replied to their email saying it was not in stock for an indeterminate amount of time (yep its their standard address [email protected]) I decide to ring.

Now interestingly, I noticed two weeks prior to that, that the live chat was removed from their website. I am sure this probably to do with the number of customers that have been chasing their HTC Desire orders because they quote:

You WILL Answer me

Up until now I have been quite relaxed, but now, when I flip, I get noticed and I get results no matter the cost in time. Trust me, you really do not want me as an angry, paranoid, scared customer, you’ll find out why next.

I use iMacros for everything, I have plans to document this amazing tool at some stage, but for now, understand the following:

Anything you do in a web browser can be scripted

So with that in mind and the new knowledge that I iMacro almost everything, I put this to good use.

I think you’ll understand from my tone in the video how pissed I was at the time, I look at it now a day later and laugh at it. I amaze myself at times.

Now if this had not yielded results, I would have driven to the stores, or used companies house to find the directors and knocked on their doors at 8:30 on a Saturday morning (after ringing them before of course, they might be miles away). Do you get a sniff of the idea of the psychopathic eBay buyers that are out there yet?

Now I am only guessing here, but they have an auto responder script that looks for the word ‘cancel’ and sends the following back. 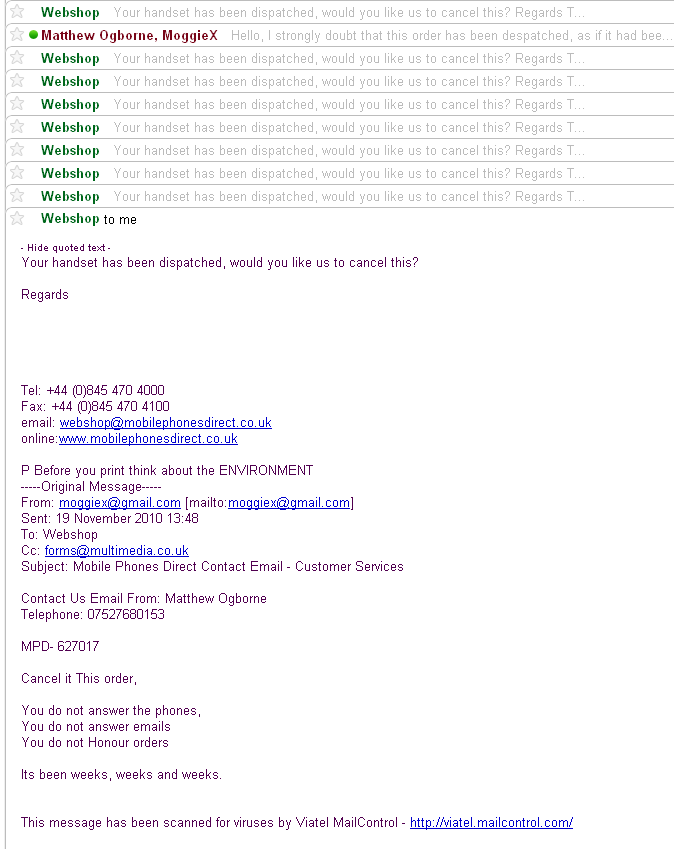 Your reading that right, this company has such a fundamental customer services issue, it needs to respond with lies.

You’ll see from the snap-shot of my email box this was an auto responder and it was sent numerous times, to the point that I got this too: 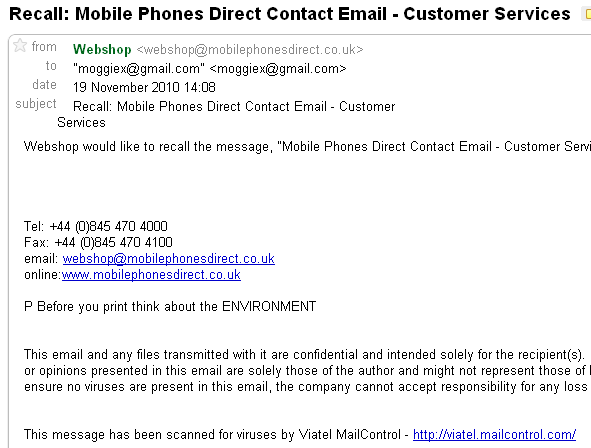 Ok, this is getting somewhere (remembering that I had minimised the browser that is still set to loop 1000 times), so I reply with:

I strongly doubt that this order has been despatched, as if it had been it would not be in its current status, nor if it had left the building you would not be readily able to stop the order.

Sick to death of no replies, cancel it as the mail suggests.

I face-palmed when I read this, they’re blatantly lying:

I’ve hit the jackpot, Mobilephonesdirect have humans working for them. There is a cheer from the ‘Matt Ogborne’ camp. Ore at its beauty:

Now, after composing myself, because at this point I have gone from one end of frustration, to practical answers and now to potential resolution.  I think about this whole experience for a few moments.

MobilePhonesDirect said and still say that they are:

We are an HTC ultimate partner and are receiving stock weekly during November and will supply Desire HD on a first ordered first delivered basis. Order Now and receive a Free 8GB memory card.

But now they ‘magically’ offering me a the phone. Do I really want to deal with this company? What if it breaks? What if I have a service issue? Why the bloody hell was it not delivered to me before, this order had been outstanding since the 5th October?

So The Reply Was?

Polite, but clear, I’ll let you relish in a well formed reply:

Being referred to as ‘The Customers’, not being answered to when calling, unhelpful when I do and no answers to previous email is not good for customer service.

I am really tempted to say I would like the phone, but unfortunately I am gravely concerned at what the outcome may be if I ever had an issue with the phone, contract or yourselves in the future, as spamming contact forms is hardly an appropriate method of provoking communication (the same as your awful auto response emails) and are amazed that you actually have these (even if just one) in stock and not fulfilled my order, sadly I regret I have to decline the offer.

Shortly afterwards, I get three emails and the order has been despatched, returned and refunded.

Warning, Your Customers Are Empowered

I only used iMacros to spam a contact form, but you must be extremely aware that like never before your customers are empowered with some deadly tools at their disposal, its called social marketing. If just one customer is pissed with your service and they are smart, they will cause untold damage.

I’ll leave it here,  make your own decision on the company in this article, a customer should never have to result to the extremes that I had to go to to provoke a response & I only hope you learn how not to deal with customers from this article.

Followon TwitterSubscribeto RSS Feed
I have had the most insane business service offering ever, but I cannot tell...

I have had the most insane business service offering ever, but I cannot tell you what is!

Opening Comment: I've been in torment for the past few weeks whether I should release this post or not, but...