Habits, we need them to survive, I’m also using several to type this article, to sip luke warm coffee at 6am on Sunday morning and you’ve most likely used one or more habits to find this article.

These are good habits, but smoking is bad and so is cleaning out the spam folder 19 times in one day, read on to see how I escaped both.

Andy lent me a book a few weeks back, it had just been published by one of his friends it was called “The Power of Habit“, it sounded pretty cool so I skimmed it and then sat down and read it back to back in a day. Turned out for me, it’s been one of the best books I’ve read yet.

As Charles Duhigg’s explains in the book, each habit has a queue, routine and a reward. Always in that path. Once you have this simple tool to work with, suddenly things become a lot easier to notice and then to change.

In the video below, Charles explains the process, with his addition to cookies and how he tackled it,

At the beginning of last week, I found myself checking the spam folder every few hours and deleting the mail in there. Somehow it felt tidy to so and only once in the past say month I have found an email that I was not expecting in there, so generally in Gmail, spam really is spam.

It was curious, as I realised I was in a habit routine, I would notice the number next to the spam folder in the top left of Gmail and that number, was inviting, I had to click on it, sometimes even if it was just one, it was an untidy folder.

I kept score on Friday, NINETEEN times I emptied that folder in one day, a completely pointless exercise checking, spotting the number next to the folder skimming junk and then deleting it, with a reward that I now had a tidy spam box.

We all know working for ourselves can be tough at times and that little win of empty the spam folder seems like a huge win at times. As Charles points out in his book, if we stop this cycle completely, the cue still exists and the desire for the reward also exists. So you can’t just get rid of them and expect cold-turkey to work.

With the emails, changing the cycle I was in was easy. I was avoiding answering the more important emails, so hiding the GMail spam folder (which you can do in Settings > Labels and then set to ‘hide’), so now the cue was gone, but the desire for the reward was there, so instead, I swapped my attention to the inbox, the folder I was avoiding and now I’ve happily replaced my spam folder addiction with the far better habit of answering the main email queue.

But that’s just one instance of a habit routine I’ve changed through using this simple process, I actually used it to quit smoking as well, by flipping Charles’ process on its head in a way I’m guessing he didn’t envisage.

As Charles explains in the book and in the video above we have a simple 3-step process: 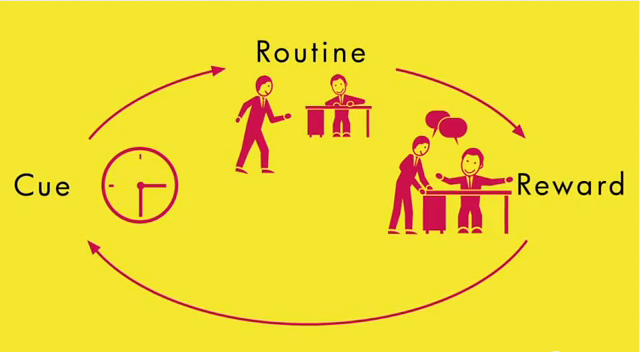 When it comes to smoking, the cue could be anything from a fag butt to a wiff of smoke from a neighbour, for anyone who has smoked and quit, you know all these queues all to well.

Breaking the Habit, with the Process itself!

It’s important to note that I had wanted to quit for some time and was preparing to go cold turkey. Even Charles explains that just stopping a habit won’t work alone, one necessary ingredient is required, that is “belief”. So I had the belief and now the tool to quit, but it wasn’t going to be a normal quit either.

What I decided to do was flip the entire idea of a habit on top of itself and I used Charles’s “habit cycle” process as a habit to replace a habit. Sounds odd? Actually it’s dead easy.

Every time I wanted a ciggy, I recognised that I was at the action stage, this was the previous action was to roll and smoke, now instead I had a process. And in this process I had sometimes missed the cue, but I my new action was that I had noticed that I wanted to smoke and there in lies the final key stage, the reward. I had recognised that I wanted to smoke, and that alone was my reward. I was using the new tool of a process to quit.

I don’t think the process was designed to be used like I use it, actually envisaging the process as a piece of paper to replace the habit process so literally, but the thing it is worked and continues to work. Yes I’ve lapsed in a few places, mainly due to alcohol, but when I did I could see my process falling apart and I hate broken processes so have rarely ventured past the first few drags and it’s been months now.

I use this simple process everyday, sometimes I know I’m in a habit loop, I like coffee and my little habit that I through several times a day, I indulge in and that’s OK. But other habits, they can be bad and now I have a simple tool that I use every day to either indulge in habits or to use them to stop smoking and stop wasting soo much time looking at spam.

You can buy “The Power of Habit: Why We do What we Do, and How to Change” on Amazon for around £8.50 and the Kindle version is around £8.00. For me, a complete bargain as I have my own copy now and I have a tool that I use daily.

I have quit smoking, stopped looking at spam emails and fully indulge in my habit loop that involves caffeine.

For big and small children it's an amazing time of the year, however with our business owner hats on, Christmas...