Selling an item online is easy, so is a couple of items, but making living from a business that sells online, well that’s something different entirely. 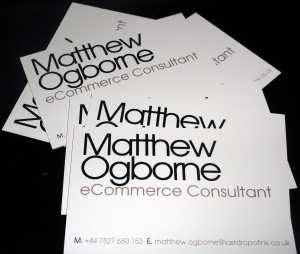 Its the application of ‘Matthew Ogborne’ that counts, anyone can point and poke, but Matt, you have the know-how, you have seen more and know more than anyone else I know. Now its for you to explain why, the where, the how. Educate these people. Share with them. They need you. Help them..

What is Project Matthew Ogborne?

Matt had actively held a back seat from the outside world in the projects he has been working on in the past few years. He’s shy’ed from the lime light, maybe too scared of criticism, success or maybe something else and this has made him almost invisible to the outside world. No more…

After working for himself and then with two SaaS (Software as a Service) companies, MarketWorks and more recently eSellerPro, Matt has seen and helped hundreds Internet based businesses grow using his own unique flair and the best tools available first hand.

Matt’s experiences, his instincts, laid honestly & openly bare for all to use as they see fit.

If it wasn’t for a great friend and long standing client of Matt, Lisa. Who gave him a stark kick up the arse in late 2010, Matthew would be keeping all his thoughts, tips and experiences to himself (You can see her comment over to the left, its just what I needed).

People have implemented suggestions Matt has made over the years and others have passed off them off as their own, this time around, you get them fresh, in their raw form to do with as you please.

You can learn more about Matt at about me page, there is a picture of him there too. Apparently it was taken while on a retail-research bender in Tesco’s. He was holding a packet ‘Spam’ at the time, I don’t think he wanted others to know that, he cropped that part out!

Matthew Ogborne
A Business Consultant
A Bristolian.
A Father.
A Lover.